How Do Film Cameras Work? 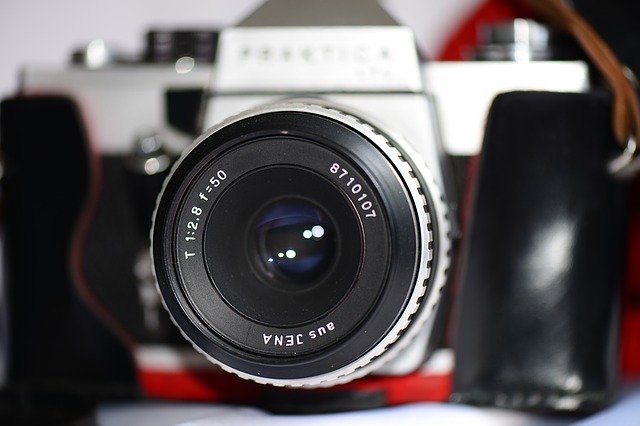 It’s how your parents took pictures back in the day, and a recent resurgence of passionate film photographers have revived the art. Being able to capture a moment in time is a special thing indeed, and many families have basements full of photo albums, chronicling the growth of children, marriages, and everyday life.

But when it comes to a film camera, how exactly does that little box manage to take a picture? If you’re the owner of an SLR (single-lens reflex) camera, or simply wondering how exactly these cameras work, then you’ve come to the right place. In this article, we’ll go over the basics of how analog SLR cameras work.

A camera is essentially a box that allows a certain amount of light in. The light that is allowed into the camera then has a chemical reaction with the film inside your camera. The way this works is that a photographer first sets the aperture of their camera to determine how much light will enter the camera’s lens. At the same time, the photographer sets their shutter speed, which determines how long the light is going to enter the lens.

You can think of shutter speed and aperture working together like a faucet. When you turn on the tap, you determine how wide you open up the faucet. This works as your aperture. At the same time, you control how long the water runs for. Your shutter speed works the same way.

Once the photographer has chosen their settings, they’ll lift the camera to their eye, and look through their camera’s viewfinder. The viewfinder shows you what your lens is seeing, and allows you to frame the image the way you want it. But your viewfinder is a little more complex than just looking through a little piece of glass.

What happens is on the other side of your lens, your camera has a mirror. If you’re taking a picture of a plant, for example, the light bounces off of the plant and goes into your camera’s lens. The light hits the little mirror inside of your camera and then bounces off of that and onto something called a pentaprism. This is a five-sided piece of glass, as the name implies, that sends the light up into the viewfinder. At this point, the photographer is seeing the image the way it will turn out in the film.

When you press down on the camera and shoot your picture, the shutters in your camera then close once they’ve let in the desired amount of light. At the same time, the mirror inside your camera moves out of the way, which allows the light to hit the back of the camera, where your film is sitting.

Now how does that chemical reaction we mentioned earlier work? Well, the film is made up of little crystals or “grain.” The thickness of the grain determines how sensitive the film is to light. A film with a thinner grain is less sensitive to light, and therefore better for outdoor daytime photography. On the other hand, a film with a thicker grain is more sensitive to picking up light and works better in low lighting situations.

When the light coming through your lens hits the film in the back of your camera, the crystals that make up the film react to that light. This reaction allows the image seen through your camera’s lens to be imprinted upon the film.

Once the camera has taken the picture, though, that’s not the final step. Now that the impression of the image is on film, it’s time to develop the film to get the final photograph. This is performed in a dark room, using various chemicals. The film is dipped into these chemicals for it to “develop.” Doing this creates a negative image. This means that colors appear in the opposite way they usually do in real life. To get a positive photograph as the final result, the person developing the photos must shine a light through the negatives and onto photosensitive paper, which creates a positive image.

While it’s easier than ever today to take a photograph with our phones, and most professional photographers will choose a digital camera over an analog camera, film photography is still a beautiful art form. Part of the beauty of film photography is understanding exactly how film cameras work in the first place. From the amount of light you allow to enter your camera to the length of time you let it go in, to the interior structure of your camera, to the chemical reaction that allows the film inside your camera to record an image, knowing how all these parts work makes you appreciate your film camera even more.

So next time you find yourself with a film camera, why not purchase some film and try snapping a few pictures? Now that you know how it works, the whole process will be even more exciting!

← Does Anyone Use Film Cameras Anymore?
What Are the Differences Between Analog and Digital Cameras? →